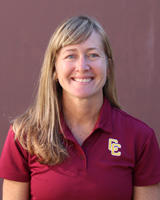 Email
Rmcgillis24@gmail.com
Robyn McGillis joined Central Catholic as an assistant Cross Country coach for the girls' team in 2013 and became the head coach in the fall of 2014. In 2014, Robyn led the RAMS to the Girls Cross Country District Championship and their first ever state meet berth. Robyn is also the current girls' distance coach for Track and Field beginning in 2014. She was recently named the Director of Track and Field Operations. Robyn was named Mt. Hood Conference Women's "Coach of the Year" in 2016, 2017 and 2018.

Robyn was a competitive Track and Field and Cross Country runner at the high school and collegiate level. Competing for University of California (UC), San Diego, she was a national qualifier in the 800m and the mile relay. Robyn is still on the top 10 list for UC San Diego in the 800m. Post-collegiately, Robyn has been a successful road racer competing for the local running club, Run Portland, in races from 5k to marathons.

In 2000, Robyn completed her MBA at the University of Oregon. Robyn and her husband Jeff live in North Portland and have two kids, Ella and Nate.