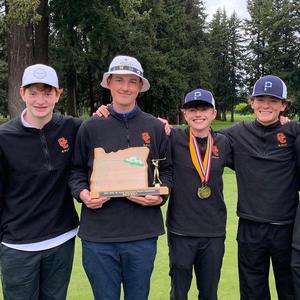 Congratulations to all of our Ram Athletes — we have so much to celebrate as we wrap up an incredible spring sports season!

Boys Track and Field took first place in state, the first-ever track and field championship for the boys team and only the second in the school’s history. The girls team took 6th place overall in state. Both the boys and girls teams were the Mt. Hood Conference Champions.

Softball claimed the Mt. Hood Conference Championship with a 12-2 record, and earned a spot in the first round of the OSAA playoffs.

Boys Golf were the Mt. Hood Conference Champions and went on to compete at state. Girls Golf came in second in districts and qualified for regionals.

Rams Baseball was the highest scoring team in 6A with a 14-2 league record. They earned second in districts and continued on to the first round of state playoffs.

Boys Lacrosse advanced to the first round of playoffs, and Girls Lacrosse finished their season strong with an immense amount of grit and hard work!

Congratulations to these teams, players, and coaches, and so, so many more that we didn’t mention! We are so proud of you and all of your hard work and determination.