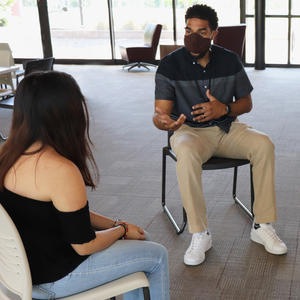 Within any school setting across the United States, discipline looks very similar. A student misbehaves, is sent to the principal’s office, and receives a disciplinary action. The specific offense and subsequent punishment can vary widely, but the general cycle persists among schools. Central Catholic has implemented this traditional form of discipline since its very beginning, and just like other schools, has given out detentions (better known as JUG), suspensions, and even expulsions for student infractions. However, recognizing the faults and inequities of this system, the school has recently taken a different approach to discipline. With guidance and leadership from David Shephard, the Dean of Student Management, Safety, and Security, Central Catholic has implemented restorative justice as a means of addressing student infractions.

Before diving into what restorative justice is and how it has played out at Central Catholic this past year, it’s important to first understand the shortfalls of a punitive system of discipline. David, who has worked in schools with both restorative and punitive systems, understands well the downside to punitive discipline. In many instances, when a student infraction occurs, the consequence is some type of detention, isolation, or removal from the general public. “Whenever there is a suspension—that only temporarily solves the problem or behavior,” David explains. “Oftentimes that behavior comes back even stronger after the suspension is served.” With that type of discipline, there is little to no work done in helping students understand the impact of their words or actions, and thus, the behavior doesn’t get resolved. “Students come back with more hurt and confusion, which in most cases enhances the negative behavior,” he adds. Punitive discipline falls short in ensuring that students learn from their mistakes and change their behavior. 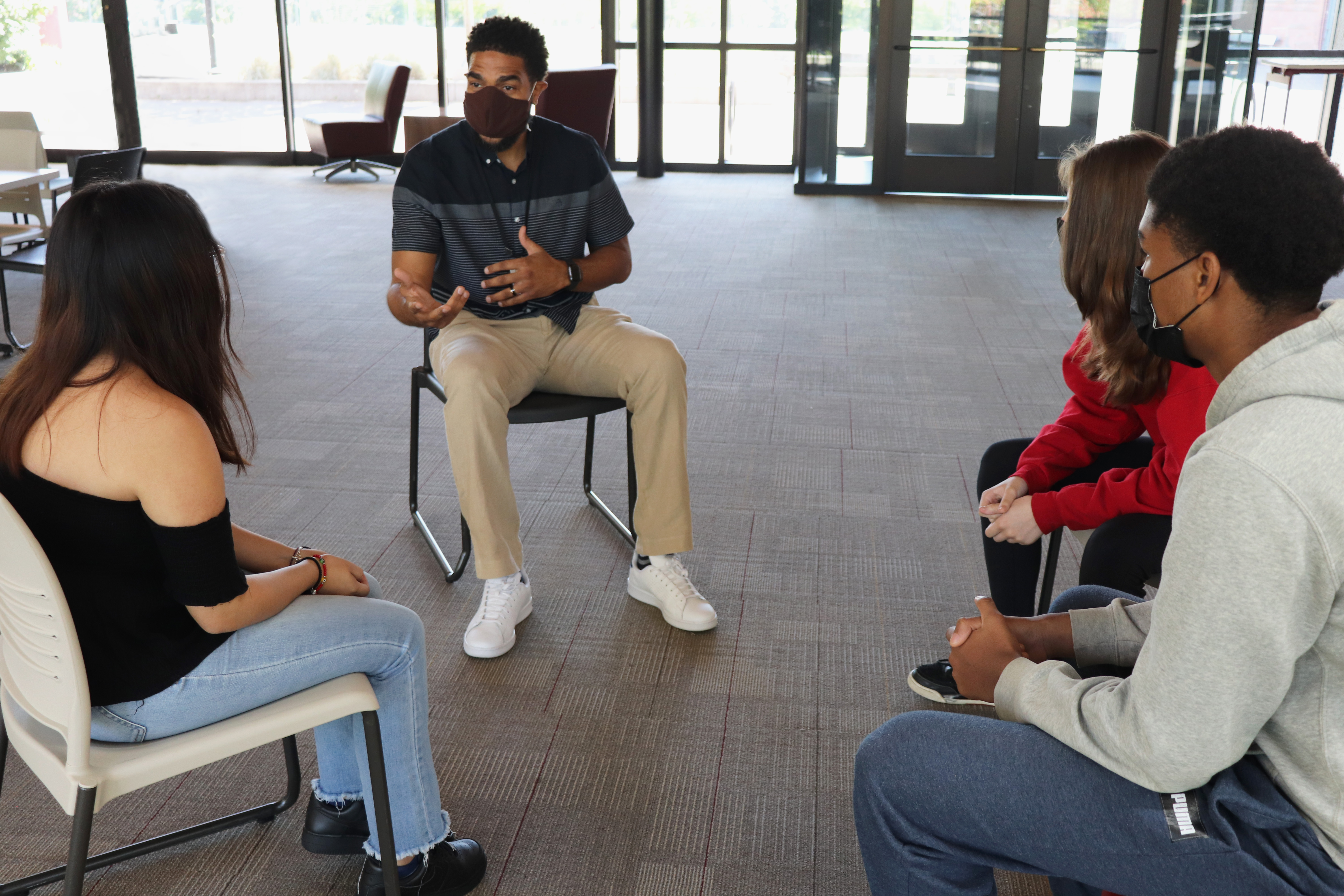 Central Catholic’s discipline policies were reevaluated in the summer of 2020, an effort spearheaded by David shortly after he was hired. He found that existing policies were somewhat outdated and strayed from the restorative justice philosophy. As a high school administrator who has used restorative justice in his work, David witnessed first-hand its effectiveness in addressing student behavior. His goal was to bring a more holistic and equitable approach to these discipline policies. Because Central Catholic was already actively working to create an environment of equity and inclusion, thanks in large part to the administration, faculty, and staff, the school was ready for this shift.

Restorative justice was officially incorporated into school policy with the beginning of the 2020-2021 school year. It is a means to address both minor and major student infractions, which might include misconduct, use of profanity, fighting, or skipping school. Offenses such as these now require students to participate in a Restorative Justice Circle at the direction of the Dean of Student Management. It helps support students and encourages growth and change, rather than simply administering a punishment.

The restorative justice process first begins with information gathering. If there is an instance of conflict between students, David, counselors, and administration talk with each student, gathering information from both sides. “Oftentimes it can be conflicting information,” David explains. From there, they will reach out to the students’ parents to involve them in the process.

The next step is to hold a Restorative Justice Circle, which brings together all affected parties to meet, discuss what happened, and settle on a plan to repair the harm. Those who are involved in the Circle include those whose actions caused harm, those who were directly or indirectly harmed by the student’s actions, friends or family of the respondent or affected parties, and the Dean of Student Management, who facilitates the Circle.

During the Circle, the responsible parties first share what happened before, during, and after the incident, and how they feel about what happened. Next, those who were affected or harmed by these actions share the same from their perspectives. Family or friends are welcome to share thoughts or feelings about what they heard, and the Dean of Student Management asks questions to guide the process and support each person in telling their story well. Once everyone has spoken, the group brainstorms options for repairing the harm done. Everyone agrees on the option that addresses the most important issues, chooses to create a written agreement, and the dean records the options chosen and compiles an agreement, which is signed by all parties. Finally, the dean provides formal closure and encourages participants to reach out with any concerns about non-compliance.

Although a seemingly simple process, the impact is immense. Having honest, transparent, and courageous dialogue about the situation helps students build communication and conflict resolution skills. “Students feel empowered because they get the chance to share, not on social media or where there are bystanders who want to see the drama,” David shares. “It takes a lot of courage for young people to have that conversation in front of their own parents, in addition to parents they may or may not know.” Including all those who are impacted in the Circle helps students to see the larger impact of their words or actions.

Along with repairing the harm between affected parties, Circles also help to repair the harm done to the larger community. David explains, “Every time there is a conflict in our community, whether it’s a student or an adult, it hurts our community.” Having the opportunity to gather in Circles is a way to bring closure and reconciliation to the members of our community. “Central Catholic is too great of a community to not allow things to be resolved,” David adds. Finding common ground and engaging in honest conversation is a reflection of the authenticity of the Central Catholic community. Restorative Justice Circles play a critical role in maintaining the integrity of the Central Catholic community as a whole.

In the event participants do not find closure, or in a case where the Circle isn’t effective in allowing parties to hear each other out, the next step is to involve community partners. These partners are organizations in the Portland area that mirror the demographic makeup of Central Catholic. “With this second phase, if the Restorative Justice Circle didn’t go well,” David explains, “we provide an enrichment opportunity for that student to be able to spend time with the community they may have offended.” Through these partnerships, students are able to shadow community leaders or engage in community service. This is typically a one- to three-day process at one of the partner sites. Due to COVID this year, the school hasn’t been able to tap these resources, but “neither have we needed to bump it to that second phase this year, which I’m really proud of,” David adds.


Successes and Challenges at Central Catholic

Within its first year of implementing restorative justice practices, Central Catholic has already seen success. In the most basic sense, it has increased student attendance by moving away from handing out suspensions. It has also improved the 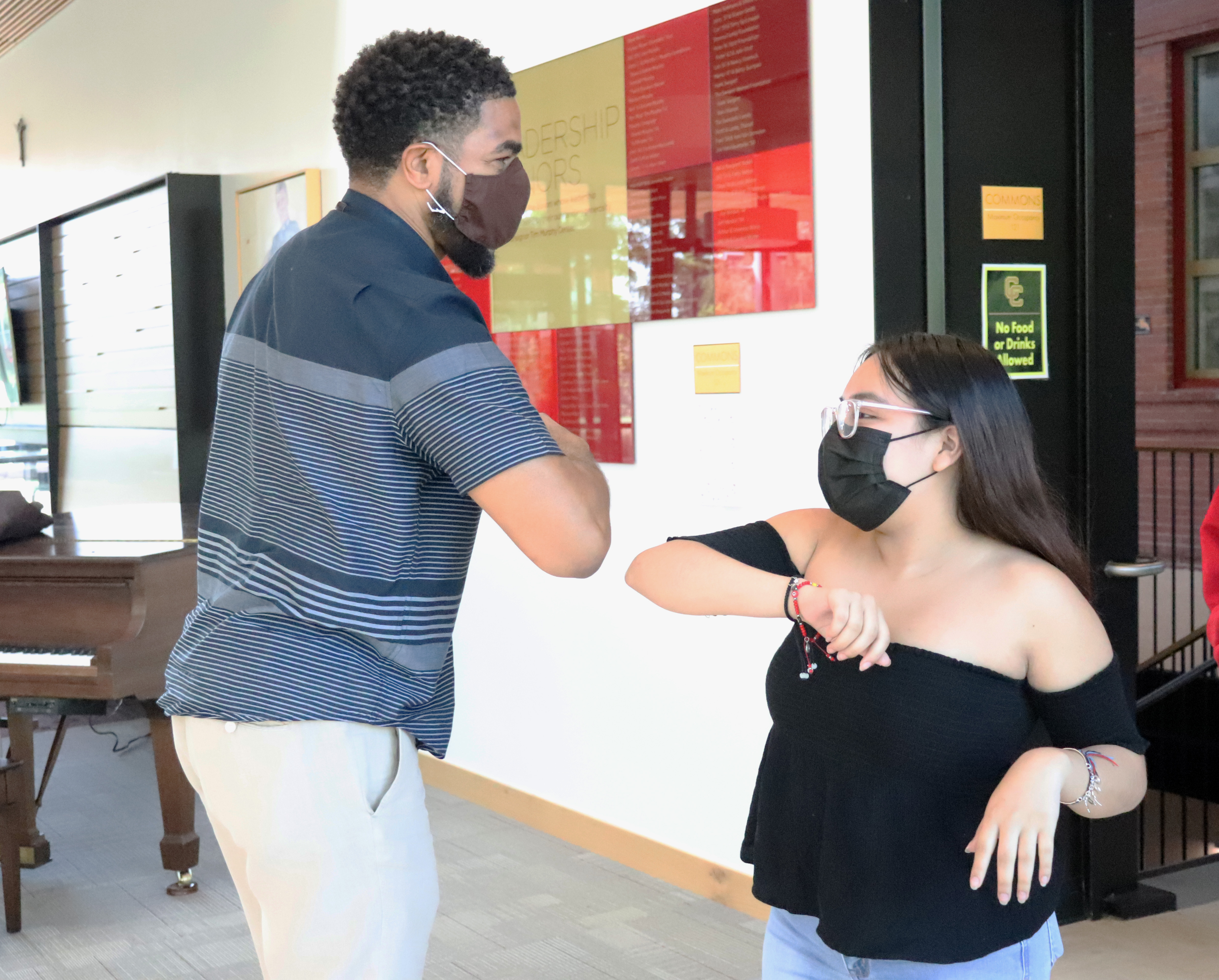 Central Catholic community as it relates to empathy by encouraging students to think before speaking and to understand how words have a huge impact on others. Furthermore, it has brought an overarching equity component to how Central Catholic administers discipline.

The discipline process no longer falls on one person, guided by their own perception or ideology, but instead involves multiple individuals in the process. With the help of the administration, counselors, as well as family and friends, “it opens it up to give a more equitable response to the situation.”

While the challenges are few, one of the main issues that arose was non-closure in the Restorative Justice Circle. Although there has only been one instance this year of non-closure, or agreeing to disagree and go separate ways in peace, it was challenging to go through. “Non-closure is always tough, but it’s a harsh reality of a conflict,” David remarks. Being able to accept nonclosure is a skill in itself, another important skill gained throughout the restorative justice process.

There are some infractions that remain too serious for restorative justice to address. Central Catholic holds a zero tolerance policy for certain offenses, such as physical assault, possessing a weapon, setting a fire, or selling illegal substances. “Unfortunately, infractions such as these are so egregious, that students will be removed from the school,” David states. Central Catholic must maintain a safe, honest, and caring environment, and restorative justice does not provide an opportunity to ensure this can happen after such a serious offense.

The shift to adopting restorative justice practices has been well received by the school community. “There have been a lot of adults and parents who have applauded Central Catholic for bringing this into the community,” David shares. From a parent and student perspective, it’s often a more welcomed approach compared to suspensions and other punitive actions. One parent whose child went through the Restorative Justice Circle after a conflict with their peer expressed gratitude for this process. They share, “How easy it would have been to punish/threaten, et cetera, yet you took the hard road that involved your time and effort. Parents and students alike saw restorative justice in action and we are the better for it.” They conclude, “I am hopeful the students’ relationship will improve—and I know that if this happens, it is because of your commitment to making them and Central’s community deeper and strong.”

Restorative justice within Central Catholic is still in its beginning stages, and it will only grow and become more impactful in the coming years. It has already benefited so many individuals and the community as a whole. In his experience of facilitating the restorative justice process, David’s found that “everybody wants to be heard, everybody wants empathy, and everybody needs an opportunity for some grace.” This coincides with one of the many goals of restorative justice, which is to “have a community that’s full of hope and restoration and full of grace.” Central Catholic has strived to embody these aspects since its beginning, and embracing restorative justice will allow the school to carry out its vision of providing robust educational opportunities in an inclusive and supportive community.