Looking back at Steve Halligan's career 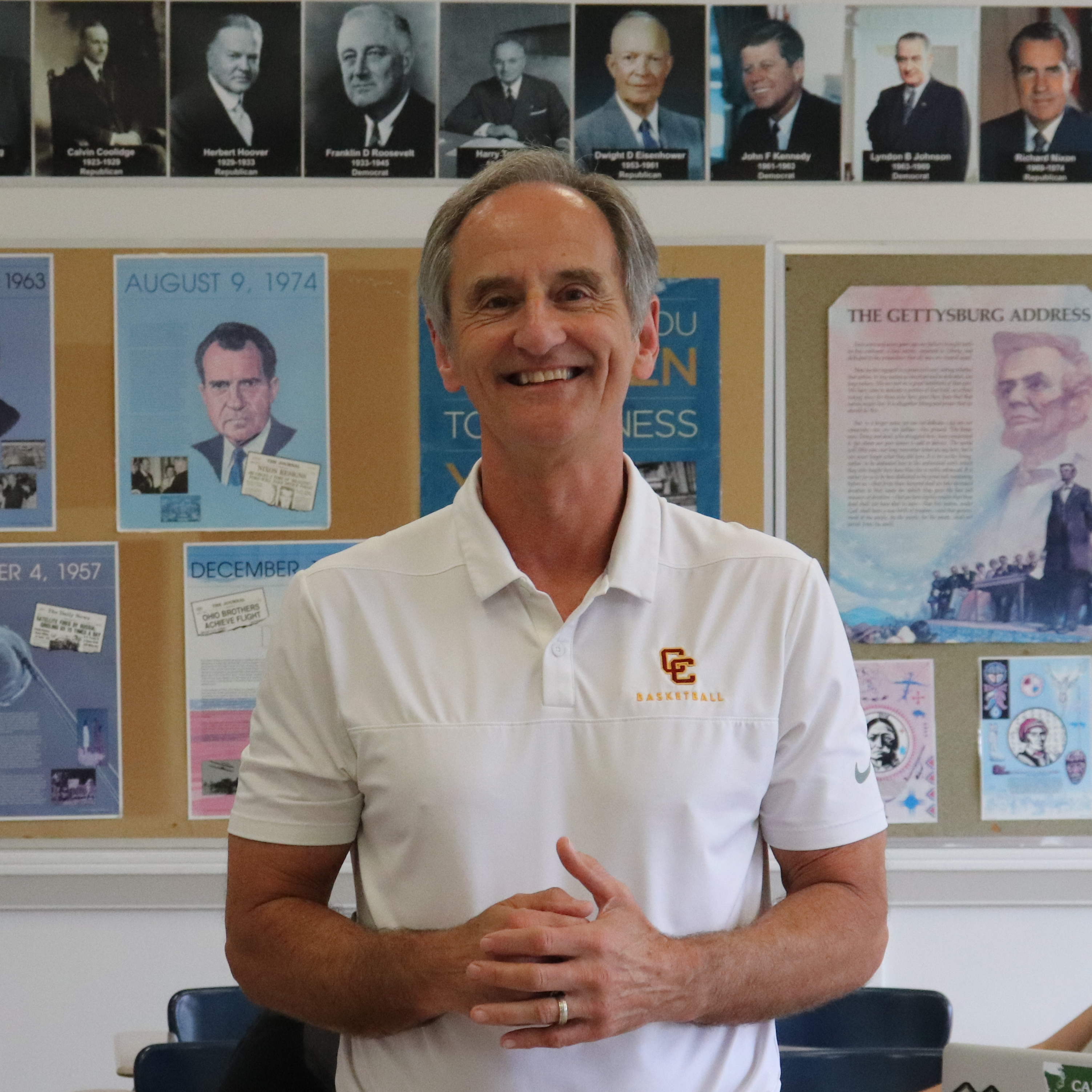 After 43 years of teaching and coaching at Central Catholic, beloved social studies teacher Steve Halligan retired at the end of the school year. Steve’s passion for the subject he teaches and the students he has nurtured and coached along the way has made a real and lasting imprint on this community. What’s the secret to 43 years on the job? Steve says, “Central has a soul that just gets into you if you let it. I found a place where I truly felt at home and at peace.”

Steve graduated from Oregon College of Education (now Western Oregon University). He went there to play baseball—and by senior year, he says he still didn’t know what he wanted to choose for a career. Then he got a call that changed the trajectory of his life. “A teacher and coach that I had in high school called me and said, ‘You would be great [as a teacher.]’ [. . .] I had thought about all the different things that I had done—in terms of coaching peewee—and being in parks and rec, and always being with people and I thought, ‘Yeah, maybe I can do that’.”

After graduating, Steve says he applied to fifty different schools around the Portland metro area. “I was actually interviewed for a job [at Central Catholic] and didn’t get it. Then a teacher resigned in the middle of the summer, so they called me back in July of 1976 and I’ve been here ever since.”

Looking back, he can’t help but laugh at all he took on his first year at Central Catholic, including U.S. History, Modern Issues, basic Math, P.E., and Wellness. On top of that, he coached football, basketball, and baseball. “I couldn’t say no cause I wanted a job. [. . .] I was one day ahead in all of those classes.”

At the time of Steve’s arrival, the school was still all boys, an environment he described as fun, different, and often times less professional. “I’m 23 and I’m teaching 18 year olds who think they know everything. In my Modern Issues class, there was a senior kind of egging me on. He says he can take me in a wrestling match. And I say, ‘No, you couldn’t’. And so, we wrestled in class. Within five seconds (he snaps his fingers), I pinned him and he couldn’t get up. I think after that, word got out and then I had a reputation. No one was going to challenge me anymore.”

Following those busy early years, Steve transitioned to working exclusively in the social studies department and has since taught core classes like U.S. History and electives including Economics, Psychology, Anthropology, and Sociology.

He says the event in his life that sparked his love for history was the Kennedy assassination when he was just 10 years old. “I remember that weekend sitting just watching everything on TV for three solid days. That just got me. Why did this happen? I don’t get it. So I became passionate about that then. History and government and policy just became my dedication.

I remember growing up in the sixties and into the early seventies. That’s a huge decade. We never in my history classes [growing up] talked about civil rights, ever talked about the Vietnam War. Ever. So when I became a teacher I thought, ‘You know what, they need to talk about life and what’s going on.’ I never shied away from any controversial topics.”

In his classroom (most will remember it as Room 113), Mr. Halligan created an environment of learning that encouraged open and honest discussions and a safe space for students to express their opinions and become critical thinkers. Parent Kristina Kallen told us, “Mr. Halligan embodies everything we tried to teach our children: truth matters, integrity counts, intellect without compassion is empty, and look at all sides of an issue before coming to a conclusion. For the Kallens, Central Catholic is Steve Halligan. Thank you Steve for opening minds and hearts through the years!”

Nicole Goretta ‘16 brought up a point that is hard to ignore about Steve’s long and storied history at Central Catholic, he taught generations of her family and other families as well. Steve taught her parents, aunts, uncles, cousins, and siblings. “All of us are happy that we had the chance to have him as a teacher. Mr. Halligan always had tons of enthusiasm in class and really made learning enjoyable. He isn’t just passionate about what he teaches, but he truly cares for each and every one of his students.”

In 2018, for the CC Magazine we asked Steve: of the many accomplishments you have had at Central Catholic, what one are you most proud of? He told us, “I am most proud of the multitude of students, faculty, alumni, and friends that still call me ‘coach.’ To me it is a term that symbolizes the impact I’ve had on their lives, directly and indirectly.”

Steve coached at the JV level for many years and was head baseball coach from 1979 to 1984 and head basketball coach from 1985 to 2006. He says he modeled his coaching style after the relational but tough coaches he had over the years.

One of his players, Mark Moreland ’82, remembers Steve’s fiery and competitive spirit on the court. “Steve ‘Get me another clipboard’ Halligan. To say Steve was a fiery coach in his youth would be a simple understatement. Too bad Sr. Jerome is not here to corroborate— but Steve went through several clipboards (especially when I found myself in the wrong spot defensively). He had the killer competitive spirit that we all inherited from our coach.”

Steve told us that he always loved the strategy, passion, and competitiveness of basketball. “High energy, that’s me,” he said.

As the head basketball coach, he led the Rams to their first and (so far) only state championship and claimed five Mt. Hood Conference championships during his tenure. When we took the title in 1994, Steve told us it was validation of how he coached. “I wanted to win every year, and I wanted to win the right way. I wanted to help young men become better men and win at the same time. I was a part of building all of that. I think you can still see the aftermath of that.”

Scott Brantley ’95 was on that championship team and says there are so many great memories with that team, but the one that sticks out the most is the van ride back from the Coliseum after the win, and the team singing ‘We are the Champions.’ “Steve was a tough coach and teacher, but it was all out of his love for all of his students and players. Coach knew how to get the most out of everyone,” Scott told us.

Another team that stuck out for Steve over the years was the 1982 varsity baseball team. That year, the Rams were ranked fourth in state, but there was an anomaly standing between them and the playoffs.

“And we talked. ‘You’ve worked all your life to go to the state playoffs, so here are our options. What do we do? We can go out there and not play our best. We can put people in different positions and probably lose, or we can go win. It’s up to you, this is your team. What do you want?’ They sat there and talked about it. They said, ‘You’ve always taught us to do our best. So that is what we are going to do’.”

Michael Flatters ‘82 still remembers that game. He said, “We went out and beat Beaverton and eliminated ourselves from the playoffs. I threw the last out of the game, and despite a number of my friends from other high schools asking me why I didn’t throw it away, I never questioned our motive.”

You can’t really talk about Steve’s career at Central Catholic without mentioning his faithful scorekeeper, office mate of thirty years, and friend, Sister Jerome Zerr. “She is one of the most decent people I have ever met. Very loving, very forgiving,” Steve said. “I think without her and Father Murphy and guys like Tom Welter who just continually gave me chances to grow up—I probably would have been asked to leave. I probably wouldn’t have been rehired several times because my passion got the best of me in my younger days. But, their just continued support allowed me to grow up and become a better person. So I can’t thank them enough.”

Monsignor Tim Murphy ’58 looks to the implementation of AP U.S. History into the Central Catholic curriculum as a good gauge of Steve’s impact on the community. “…Think of the challenges and opportunities he has provided our students in the classroom setting; more specifically, Room 113. Rather than trying to use as a barometer the wins and losses over the years of his basketball and baseball coaching, better to take the academic side first and then to think of the sports teams’ records as a bonus.”

With retirement on the horizon, Steve told us he was very much looking forward to not waking up early every day. Many don’t know that Steve started his day at Central Catholic at 6:15 a.m. because he liked to smoothly transition into the day ahead.

With all the new time he will have on his hands, he wants to start trying new things and revisiting old hobbies. “I want to do things that I’ve never had the chance to do. I inherited a piano from my mom. I know how to play the guitar but I want to teach myself how to play the piano. Do some photography. All kinds of things that I’ve just never had the chance to do.”

He says he also plans to help out with his grandchildren. Steve has been married for 43 years to his wife, Terry, and they have two children, Carli ’98 and Tony ’02, and three grandchildren.

It should come as no surprise that more than 200 people came back to Central Catholic for Steve’s “Last Lecture;” a part of our Stark Talk series. The evening was a special moment of recognition of Steve’s profound impact on our community and an opportunity for him to dazzle us all again with his wit, grace, and intellect.

This spring, more than 85 individuals and families stepped up and contributed to the Steve Halligan Scholarship Fund. The scholarship hit the $25,000 endowment mark in June thanks to our communities generosity and admiration for Steve.

So here’s to you, Mr. Halligan, Coach, Steve. It is hard to encapsulate such a legacy. We’d like to conclude with a message from Paul O’Malley, Director of Admissions. “You are a man of unrivaled integrity, you are the standard of excellence in teaching and coaching, you are a pillar of this school’s storied history, and you will be GREATLY missed. Know, however, that as you move on to the next phase in your journey that you will always be remembered and, dare I say, revered. I’m sure there are those few students over the last 43 years who challenged you and made you question your vocation. I hope you’ll focus on the thousands of others whom you beckoned to be better versions of themselves, whom you coaxed to be deeper thinkers and better citizens, and whom you thrilled with the depth and breadth of your knowledge. Your passion for teaching and your compassion for others will be an endearing memory.”

Thank you, Steve, for your unwavering commitment to Central Catholic over the past four decades. The impact you have had on this community will carry on for years to come.