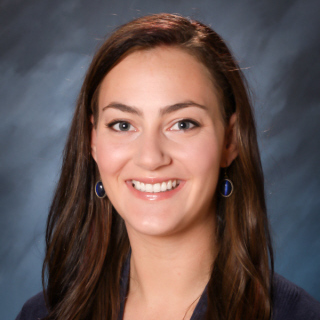 Central Catholic is proud to announce that its next volleyball head coach will be Kayla Hambley. Kayla started with the Rams in 2011 as a coach at the JV level and has worked as an assistant varsity coach the past two years.

As a valued member of Central Catholic’s faculty, Kayla teaches A.P. Psychology, Psychology, Wellness, Girl’s Strength and Fitness Development, and Physical Education. She is also an active member of a Campus Ministry team that plans, organizes, and leads retreats for Central Catholic students. Being a teacher at Central Catholic, Kayla enjoys the opportunity to interact with her student athletes in the classroom, on service projects, and during retreats, allowing her to see the many gifts and talents of her players that are not always visible on the volleyball court.

Her coaching philosophy is rooted in her belief that in life, academics, and in sports, the process of learning is more beneficial than the end goal. She is a strong advocate for helping volleyball players grow their “volleyball IQ” (knowledge of the game) which in turn will help each athlete increase their technical and communication skills while raising their level of play for the benefit of the team. Kayla also believes in coaching for character, in that if athletes embody grit, determination, teamwork, poise, dedication, leadership, integrity, and passion, the wins will take care of themselves. Above all, Kayla believes that being part of a sports program is a gift, one that allows young athletes to develop as people for others, playing for the love of the game and for the greater glory of God.

A Portland native, Kayla was a member of the 2004 volleyball state championship team at Jesuit High School. She was a four year varsity athlete in volleyball and track and earned all-league honors in both sports. She played four years of collegiate volleyball at the Division 1 and NAIA levels starting at Fairfield University, Connecticut and then transferring to Carroll College, Montana. In December of 2016, Kayla completed her Masters in Neuroeducation from the University of Portland.

Looking ahead to the 2020-21 season, Kayla is most grateful for her returning coaching staff who bring years of experience, passion, and sound technical coaching to the program. Malcolm Doi, a coach at Central Catholic for 25 years, will remain on staff as the program’s Varsity Assistant. She is especially thankful for her predecessor Rick Lorenz, the varsity head coach at Central Catholic for 30 years. Rick and Malcolm’s mentorship, advice, and support have helped Kayla grow as a coach and person.

Kayla is looking forward to continuing the legacy of the Ram volleyball program with dedicated athletes who act with character and respect. Inheriting a program with this level of success and recognition is a blessing and also quite a challenge - one that she is excited for!