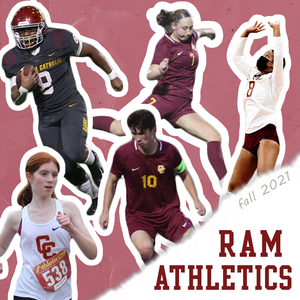 We have so much to celebrate as our Ram Athletics wrap up a fantastic fall season and ramp up for playoff competitions!

Both JV and Varsity Volleyball were undefeated in the regular season (16-0) and Varsity was the Mt. Hoot Conference Champions. They won their first round playoff match against South Medford on Wednesday, and this Saturday they will face off against Nelson for the second round of playoffs.

Varsity Soccer teams had great seasons, with boys finishing 10-5 and the girls with a 7-7 record. Both teams will play in the first round for the state championship this Saturday, with boys taking on Cleveland and girls facing off against Jesuit.

JV2 (freshman) Football finished their season 9-0, the first freshman team in Central Catholic history to go undefeated. JV Football finished their season with a win over Sherwood this week and with an overall 4-4 record—a very successful season in spite of the many cancellations and schedule changes. Varsity football currently holds an 8-0 record and will compete against Clackamas High School in a nationally broadcast game tonight.

Congratulations to these teams, players, and coaches, and so, so many more that we didn’t mention!  Good luck to our Ram Athletes in their upcoming competitions!