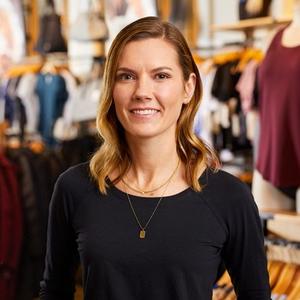 Integrity and Conscientiousness were two of Central Catholic’s Virtue words during the last school year. For this alumni interview, we are turning the spotlight on Nikki Neuburger ‘99, a person who exemplifies both integrity and conscientiousness. You may have heard of Nikki and her incredible volleyball talent or her business acumen at Nike, Uber Eats, or Lululemon, but in everything she tackles, she does it with hard work and by her guiding light of integrity.

Nikki Neuburger comes from a long line of Rams, and family was the driving factor that brought her here. Her uncle, Papa Don [‘52], and Grandma Anne (Anna Marie Graham) were the heads of the family, and all of their children attended either Central Catholic or St. Mary’s Academy. Nikki’s family is also ingrained in the volleyball community, with both her parents, Carl and Terry, coaching and Rick Lorenz (former Central Catholic head volleyball coach) as her brother's godfather. “There was a time when I was playing for Central Catholic for Rick, and my dad was the coach for West Linn, and my mom was the coach for Barlow. I was competing against my family!”

At Central Catholic, Nikki jumped into many different activities. She participated in sports; track and field and volleyball, but she was also interested in much more that Central Catholic had to offer. She was most curious about Christian

Service and art, and spent a lot of time at St. Francis Dining Hall, Sisters of the Road Cafe, and, as she calls it, “down those stairs into another world” in art room B1.

Of course, she also spent a lot of time playing volleyball. She played both for Central Catholic and year-round with the Portland Volleyball Club, which was founded and run by her dad. It was while playing for her dad that she received and benefited from tough love. “Rarely a week went by where I didn’t get kicked out of practice at some point for something. There were many rules to live up to, like, ‘Never miss a serve after a timeout.’ So, if I missed a serve after a timeout, I would get subbed out and sent to sit in the stands to think about what I should have done differently. A very different time, can you imagine that happening today!?”

Although her dad was hard on her, she rose to the occasion because of the internal drive and mental toughness he helped her to develop. She also benefited from being coached before and after games, and during their rides to and from practices. He taught her how to think strategically - to think about things a few steps ahead. This ability to think strategically would help shape her skill set for the future.

Nikki had the opportunity to visit the Nike Campus early on in middle school, and she thought it was the coolest place she had ever been to. “I was a young team sports athlete, who lived and died for all of these sports icons and, obviously, the product I was really passionate about. I knew that I needed to be there. I became laser-focused on what I needed to do to get a job at that place pretty early on in life. It became a clear goal.”

Nikki’s goal of playing volleyball at the collegiate level came to fruition after she was recruited by and offered scholarships to several different programs. However, she was determined to play at the highest level within the Pac-10 (now Pac-12) conference at Oregon State University (OSU). They had an international business and fashion merchandising program, which was of interest to Nikki. They didn’t offer her a scholarship right out of the gate, but, ever tenacious, Nikki walked-on to the OSU volleyball team and ended up earning a full scholarship.

Collegiate athletics, and particularly Division I, seemed like a full-time job, however, Nikki still focused on the next steps ahead of her. When she wasn’t in the gym, she was in the computer lab for business. She knew she needed to build out what she looked like on paper and the value she could bring to a potential employer.

Nike was still the ultimate prize for Nikki since that trip in middle school. She applied for the Nike internship, but did not get it right away. It took three summers and three attempts before she landed that coveted internship position. While she was getting rejected, she was figuring out how to make herself more attractive as a candidate. With deliberation, Nikki hustled to intern and work at different companies like Fox Sports Northwest and Nordstrom, and she even went abroad to study at Copenhagen Business School.

Nikki was eventually accepted to the Nike Adrenaline Internship Program. The program’s purpose was to expose interns to many different people and departments within Nike, which allowed Nikki to see where she could add the most value and find where her passion lay. Fourteen years later, and still at Nike, she made a name for herself working with the group tasked with developing the new Nike mobile app. “It was the team leading the charge to evolve the business from being largely wholesale-focused to connecting with and selling directly to consumers. Much like when she was playing for her dad, Nikki tried to see the game a few steps ahead, and realized, “This was the future of retail, how brands will connect with their consumers directly and personally at scale.”

Nike operated differently at the time, and Nikki began to think maybe there was more out there that she was interested in. Even though she considered leading the marketing team for the Nike Running category, her dream job, she was inspired by people who had more varied lived experiences – working for different companies and living in different cities. Nikki decided she wanted this as well, and so she left Nike for Uber Eats in San Francisco to lead the global marketing effort there.

Nikki holds Nike in high regard in terms of their integrity. “What it means to be a great iconic global brand in the world is that you declare your values loud and proud. Part of the reason that you do that is because it makes it super clear for both your employees and your consumers who you are and what you stand for, and when you are not living up to that, people will hold you accountable, at which point you can own it and make changes - or not.”

Nikki’s actions also speak to her own personal integrity. “Be really clear with yourself about what is important to you and what you are trying to accomplish and then work to live up to that with your choices. When I don’t feel like I am in integrity, then that's when I stop to take a

second and go, ‘Ok, alright, what choices do I need to make differently?’”

Nikki’s time at Uber Eats really helped her to think more globally and to strategize about how to better build a global brand. She was there for two years when she was approached by Lululemon. She wasn’t sure she wanted to go back to the athletic apparel industry so soon, but in the end, sports, fitness, and wellbeing were where her heart was.

The Nike and Lululemon brands are very different, and the move to Lululemon provided a growth opportunity for Nikki. “I would say, Nike is known for winning and championships and competition, whereas Lululemon is known more as a yoga brand rooted in wellness and community connection. The goal is to be healthy and happy and fulfilled.” Lululemon is a place where team and integrity matter. “It is a phenomenal people-first organization and a community that is super clear in its purpose.”

For example, there is an employee benefit called “Sweaty Pursuits” that gives money to employees to attend local fitness classes. It’s a way to contribute to the culture of the brand, by being out in the community to show support. During COVID, with studios closed, the organization pooled these resources and distributed grant money to studio owners to help them keep their businesses running.

Many young people don’t know what they want to do with their lives. It was unique that Nikki knew what she wanted so early in her life and worked so hard to get it. But the perspective that Nikki shares with young folks is, “Be clear with your purpose and your values. It starts there. Then I think it is honestly about identifying what industries, brands, people or categories have shared purpose and values that align with your own. Once you have identified that, you can work to chart a path - acquiring the types of skills, experiences, and relationships to set yourself up to get to where you are trying to go.”

Nikki also wants to encourage others trying to find their way, “The last thing I would add is this: seek out individuals that inspire you for whatever reason. Talk to people, be bold and be brave! There is no risk in trying to have conversations with people. Oh! And also, I think it’s really important, as people start to find their way and chart their path and have success, to bring other people along with you. I am the beneficiary of people making space for me and bringing me into rooms that probably I had no business being in, based on the level I was at in the company or whatever my projects were. Great leaders, managers, friends, and mentors open the door and bring as many people as they can through it with them.”

Striving to always do the right thing, Nikki is and always has been deliberate in what she does; whether it was improving in volleyball, getting her foot in the door with Nike, or leading global marketing for Lululemon. She embraces and lives out integrity and conscientiousness in her work, personal life, and relationships. You can bet Nikki will continue to search out new growth opportunities and open the door wide for others!